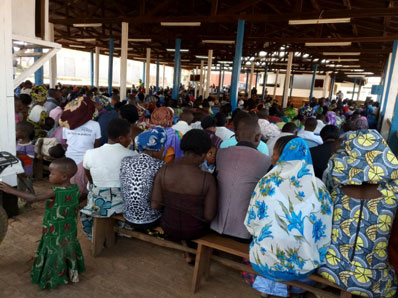 Oracihola used to be a Pentecostal evangelist. In 2012 he was invited to attend evangelistic meetings where Dr. Williams was holding a series in the City of Bukavu, DR Congo. Leonard was so impressed with the preaching and the doctrines. One day he came early to the meetings so he could ask questions about SDA church beliefs. He was convinced that the SDA church is the true church but he had a problem with his leaving the Pentecostal church and to have a sufficient living. Dr. Williams encouraged him to make a decision for eternal life and told him that God would take care of his life and finally he decided to be baptized with his wife and 2 of his children. After his baptism he had a very difficult time, leaving his job and the Pentecostal church. In 2014, he attended the training with TT2F and became a Bible Worker. He has been sponsored by TT2F since that time and he planted a small church in the city of Bukavu. The church has grown to 48 members and TT2f is renting a worship place for them because the land is too expensive in Bukavu City.   He is in need of prayer and support.